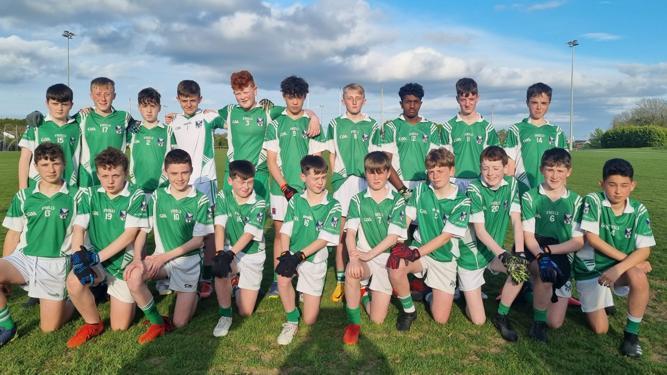 Published: about 1 month ago

Gers U14 Boys finished off their Division 1 League campaign with an emphatic win over O’Connells/Stabannon Parnells to currently lie in 6th place in the table.

This was a fine performance by all 20 players showing great teamwork with a vast improvement in keeping possession and shooting from the scoring zone - something the boys worked hard on in training in the last week. This was shown by a spread of 11 different scorers.

Oran Garavaglia had his usual strong outing in goals with excellent handling and kickouts. The full back line of Ronan Traynor, Owen McGahon, Thomas Quinn-Stuttard and Sean Costigan marked tightly, swept out any attacks and were the bedrock of the performance. The half back line of Eoghan Traynor, Aodhan Gibbons, Jack Greene, Oscar Conway and Connor Ward tackled brilliantly and surged forward at any opportunity. Brothers Mal and Finn Madine dominated midfield with great workrate and effective distribution. Half forwards Conor Whitmarsh, Aaron Walsh, Aswanth Sivaraman and Eoghan Sweeney never stopped working linking the play well and always playing the ball to the players in the best position. In the full forward line Odhran Mc Shane kicked some lovely scores, Noah Lauaki was a handful for the opposition defence with his finishing and Maciek Dobros was very effective at winning his own ball and dispossesing defenders. Great to see Conall Bowden back from injury and scoring a fine goal.

Thanks to O’Connells/Stabannon Parnells for a sporting game. Next game is Wednesday away to St Mochtas in U15 Division 3. Good luck lads 👍

Successful Start To 'Walk & Talk' at The Gers🚶‍♂️🚶‍♀️

Well done to everyone who joined us for the first 'Walk &...

The Geraldines Walking Club gets underway on Monday (4th ...

What a gallant effort by a great bunch of girls.Moneyglas...